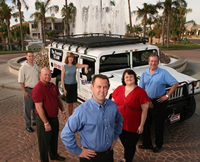 Home of the one hour returned call
In 1994-95 Troy received the “Rookie of the Year Award” from one of the largest Real Estate companies in the world. He realized quickly that getting his name out and marketing was a  key ingredient to a successful career in Real Estate. The next logical step was purchasing an office with the most recognized real estate logo in the world – RE/MAX. Lastly, Troy needed a team of top professionals, he created “The Reeves Team”. This was a new idea in the real estate market at the time. Nobody had tried this approach.

90 day sale guarantee
After spending most of his time in his car, Troy decided a traveling billboard was in need – not just an average vehicle but a powerhouse. Thus, HUMMER became The Reeves Team Trademark, in 1997. With the success of the “One Hour Return Call” and implementation of the “90 Day Sale Guarantee.” Troy and his team became one of the Top Ten Real Estate Agents in Arizona. Next on our list of marketing ideas, providing the Highest Level of Service a Real Estate Agent and his Company can provide.