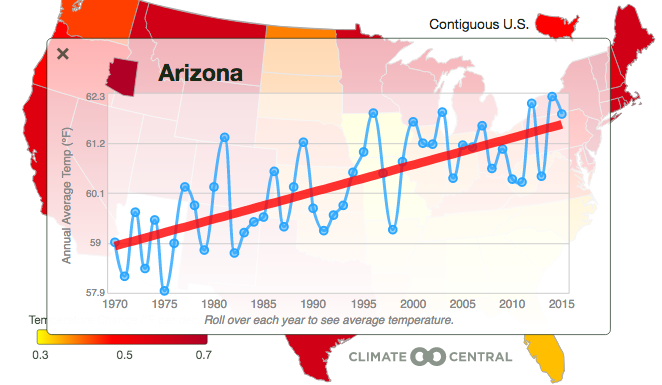 Climate change is a hot button topic.  Most people have a strong feeling one way or the other if climate change is man made or just a part of the earths normal cycle.  At The Reeves Team we aren’t here to pick a side.   What we do know is that, regardless of if its because of man made carbon dioxide, the earth is getting warmer. The planet’s average surface temperature has risen about 1.62 degrees Fahrenheit (0.9 degrees Celsius) since the late 19th century. Most of the warming occurred in the past 35 years, with the five warmest years on record taking place since 2010.  We also know that this has caused more sporadic weather patterns.  Here at The Reeves Team we don’t take sides we just tell you how it can affect you and the Gilbert housing market.

A huge number of mortgages each year are written for high risk homes near or on the coast.  Up to $100 billion worth each year. Over 300,000 existing coastal homes will be repeatedly flooded, or lost altogether, within the next 30 years, according to sea-level calculations that the Union of Concerned Scientists publishes. Many high population states including California, Texas, Florida, and New York are vulnerable. Currently with housing prices continuing to rise in these areas the market is not properly factoring in these long term risks.  As the volatility in weather continues to rise over the coming decades many homeowners will give up on the coastal regions and head to other areas in the country with similar weather.  Arizona is in a great place to accommodate these homeowners, and in particular California residents.  We are within driving distance to California, we have similar weather with no snow year around and our house properties look like massive bargains compared to what people are currently paying on the coast of California.  We have already started to see a shift and many of the newer residents of Gilbert and the surrounding areas come from California and other high value coastal areas.

Warming Of The Valley

So the good news is that we should see a rise in transplants from coastal areas that feel like our housing is a bargain.  On the negative side we will see more of something else we already have an abundance of. Heat.  The Phoenix metro area is the second fastest warming city in the U.S. and our average summer temperature is nearly 2 degrees hotter than it was in 1970.  Some of the negative affects this may bring include; An increased need for water while at the same time a decrease in our water supply. An increase in the length of our mosquito season.  We will also see an increase in the amount of days with extreme heat.  We currently have over 6 more days a year with heat reaching above 110 degrees than we did in 1970.  We will also see an increased likelihood of drought as the temperatures steadily increase.  So what does this mean for home prices?  Well as we see an influx of people moving in from coastal areas, we can expect those gains to be offset somewhat by those that are trying to beat the heat and decide to migrate elsewhere.  With increases in technology including advancements in home insulation and multi pane windows as well as increases in Air Conditioning efficiency we can hopefully offset some of the negatives by continuing to keep our living environments sheltered from the elements.

Back To The Midwest?

Over the previous decades we have seen a mass exodus of residents of the mid-west.  Populations in rural Midwestern cities have plummeted and even major cities populations in the Midwest have stayed stagnant to slightly down, such as Chicago.  In the meantime cities populations in the west and near the coast have exploded.  Arizona has been one of the biggest winners as we have seen our population continue to grow steadily over the previous decades. With the increases in population in the coastal areas, as well as increased weather volatility and increased prices will we see a reverse in this trend?  Will people eventually look at the costs of living in the Mid-West and determine the costs are just to good to be true?  One major reason people have shifted out of the Midwest has been jobs, but now that America’s employers are starting to allow for a more remote workforce this could allow for people to acquire a relatively high paying job while still having the incredibly low living expenses of living in the Midwest.

So what do you think?  Will we continue to see the temperatures rise?  Have you considered moving from Arizona back to the Midwest?  Let us know in the comments below.