What are some of the reasons folks are moving? 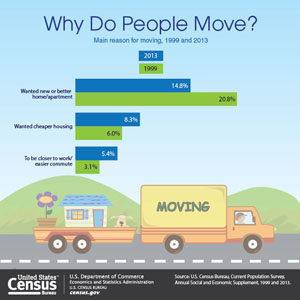 The U.S. Census Bureau reported the other day that among the 36 million people who moved between 2012 and 2013, 5 percent said the most important reason for moving was to be closer to work or for an easier commute.
Another 8 percent cited the desire for cheaper housing.

The most common reasons for moving in 2013 were wanting a new or better home/apartment, other housing reasons and family reason.

For people who moved from one county to another, moving because of a job-related reason rose with the distance of the move: 23 percent of moves less than 50 miles and 48 percent of those 500 miles or more.

The data are analyzed by a range of demographic characteristics, including age, sex, race, origin, educational attainment, marital status, labor force status, type of move and distance moved. These national-level data were collected by the 2013 Current Population Survey’s Annual Social and Economic Supplement.

Have you been thinking about moving? Troy Reeves & The Reeves Team would love to assist you with that move. Our website relocateaz.com allows you to search homes that are listed. We also have resources that will also you to look at properties all over the world. Buying a home can be a stressful experience. You want to make sure you have the right person by your side to help guide you through every step of the transaction.