Eastmark is thinking big, really big. The slogan says it all, Eastmark will be “the heart and hub of the East Valley.” That would place it with existing hearts and hubs that in some cases had head starts of more than a century — places like downtown Tempe and its huge university campus, and a downtown Mesa that is rapidly gaining regional cachet. It will take time, but the Scottsdale based DMB believes Eastmark, the former General Motors Desert Proving Ground will live up to the lofty slogan.

Eastmark has been meticulously planned since DMB purchased the land from GM in late 2006 for $265 Million, but its not just about the planning, lots of communities have great features, its also about the location. Eastmark is positioned next to the eastern edge of Phoenix-Mesa Gateway Airport, the Gateway airport is the fastest-growing airport in the country. It’s also a stone’s throw from Arizona State University’s Polytechnic campus and from a former Air Force lab that Mesa hopes will soon become a powerful research magnet. And it’s only a few hundred yards from where the new Arizona 24 freeway will connect later this year with Ellsworth Road.

The Reeves Team, and many other Valley Real Estate Experts believe Eastmark has the potential to someday blossom into a virtual city in its own right, with several urban corridors, 15,000 dwelling units ranging from mansions to urban condos, and tens of thousands of high-paying jobs.

Eastmark is being developed around a central idea: that growing and maintaining a true community is predicated on creating energy, vitality and, most importantly, human connection. Eastmark looked at how people want to live today. How they work, play and socialize. How they create a sense of neighborhood and home. Then they began planning for how best to accommodate and encourage that lifestyle. The result? An artful blend of residential neighborhoods, planned resort components, employment cores, recreational spaces and commerce—all designed to effortlessly connect by an expansive 100-acre Eastmark Great Park.

A major feature of Eastmark will be a “great park” cutting a diagonal path through the heart of the development. The First phases of that park are already complete, including a lake that was filled with water last month. At the south end of the lake will be a 10,000-seat amphitheater. Also complete is a building called “the Mark,” at Eastmark Parkway and Ray Road. Now serving as Eastmark’s primary sales center, it will become a rec center once a new sales office can be established in a future retail corner at Ray and Ellsworth roads. Close by the Mark is a pad for a Mesa fire station, and just north of there is the charter school.

Eastmark is also Mesa’s first community to use all-LED streetlights, one of many efforts to conserve power and water. 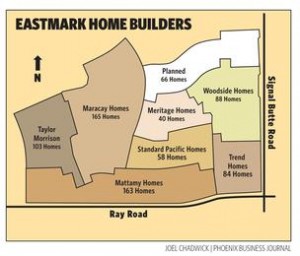 There are many options when it comes to home builders in Eastmark. Many Valley builders are already signed on including Maracay Homes, Mattamy Homes, Meritage Homes Corp., Standard Pacific Corp., Taylor Morrison Inc., Trend Homes and Woodside Homes. Navigating as many choices as there will be in Eastmark can be tough. Contact The Reeves Team to help you find the perfect Eastmark home for you and your family.