The Scary Truth? Or A Real AZ Housing Recovery? 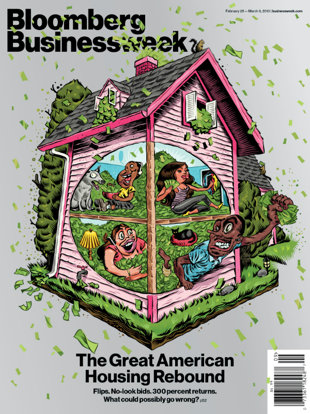 Housing economists across the nation are watching the Phoenix housing market very, very closely right now for one reason: the truth. A recent cover story by Bloomberg Business Week paints a pretty optimistic picture, and yet on the flip side (pun intended) over at the Washington Post a very different picture is being portrayed. So what’s the truth? Is the Phoenix housing market truly turning around, or is it another inflating bubble that is getting ready to burst, again?

Bloomberg got A LOT of flack for a recent cover story featuring minorities with loads of cash in a new home. In fact, they received so much criticism they issued a formal apology, saying “our cover illustration last week got strong reactions, which we regret. Our intention was not to incite or offend. If we had to do it over again, we’d do it differently.”

Why was the cover so offensive, especially to Phoenix residents? According to the NYPost, all of the characters depicted in a cartoon house awash in money were drawn to look like minorities – implying that they were the ones expected to trigger the next (housing) bubble.

In the controversial Bloomberg article, Phoenix is painted as on the road to recovery, with job growth at 3% over the last year, almost twice as much as the national rate, and home prices going up because inventory is low. Phoenix home prices have increased 88% in the last three months of 2012, according to the National Association of Realtors, which could mean a Phoenix housing recovery.

Sidebar: With that in mind, how do you know who to trust when selecting an Arizona real estate agent? According to the Bloomberg article, everyone is out to make money and nothing else. Back when things were goo before the housing crash, people quite their jobs to get into real estate simply for the money. Typically, that’s a great sign of a realtor’s intentions. Ask them how long they’ve been in the business and why they got into the business. You’ll find that there are very few Phoenix realtors as genuine and hard working as those on the Reeves Team.

A recent article from The Washington Post deeply criticizes Bloomberg BusinessWeek for their cover story, calling it a ‘regrettable turn.’ The Washington Posts questions “whether this is a sustainable recovery or whether profit-minded developers, flippers, brokers and so forth could be blowing up another bubble waiting to pop.

Because job growth is still low and many homes are still empty, many economists see this growth as less sustainable “making it a poor bet to expect home prices to keep rising.”

Another aspect left out of the Bloomberg article is “how mortgage fraud, predatory lending and other abusive practices also fueled the original housing bubble and subsequent crisis….Arizona was among the states with the highest number of subprime mortgages – and the weakest anti-predatory lending laws.”

So, are those structural problems still in existence as we work towards a Phoenix housing recovery? Troy Reeves and the Reeves Team knows this market inside and out, and will take care of you like no other agent in Arizona. With more years of experience than can be counted, and a wealth of knowledge on the Arizona housing market, the Reeves Team will keep you protected and keep your best interests at heart. Give us a call today to get the truth about the Arizona housing market, and when you should buy, or sell!  480.892.1969