Fastest Growing Airline In U.S. To Begin Flights From Mesa 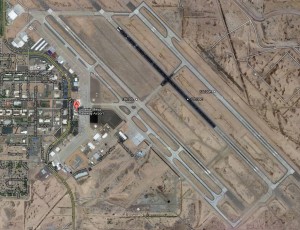 Frontier Airlines will begin flying to the Phoenix-Mesa Gateway Airport this fall.

The airline will fly one daily round-trip flight between Phoenix-Mesa and its hub in Denver, and plans to expand its destinations soon after. The carrier will use Airbus A319 jets on the route.

Denver is the top air travel destination from Phoenix, this expansion into the Phoenix-Mesa Gateway Airport allows Frontier to further differentiate their product offering.   Frontier is the fastest growing airline in the country, and calculated moves like this help explain why.  The Mesa Gateway destination provides greater convenience and access to customers living and working in the east valley community.  Frontier is currently known for their high value, low fare service and their customer friendly options.

Frontier Airlines will offer only one daily flight from Phoenix-Mesa Gateway Airport to Denver, but the airline is already driving down ticket prices.

The Denver-based carrier announced plans Monday to start flying from the east Mesa airport in November in addition to its existing flights from Phoenix Sky Harbor International Airport, and it is offering introductory round-trip fares of $137.59 from Gateway.

Tempe-based US Airways, whose lowest fare to Denver for that time period was $215 round trip, quickly matched Frontier’s price on Denver flights even though it doesn’t fly out of Gateway.

Frontier said the introductory price is for tickets booked by Saturday for travel through March 17. After that, the lowest round-trip fare will be about $160.

That is significantly less than average fares on the Phoenix-Denver route.

The Phoenix-Mesa airport, it has had spurts of commercial flights since the 1990s, though most were offered by small charter or sightseeing operations and few stuck around for the long term.

However, that changed in 2007, when Allegiant Air began service to the airport. The carrier made the city one of its focus cities, a development that has load to soaring passenger numbers at the airport.

Spirit Airlines became the second major airline at the airport when it began service there earlier this year.

The terminal will be expanded to eight gates just before Frontier begins service Nov. 15, immediately followed by construction to bring the terminal to 10 gates.

Airport officials recently got approval to accelerate some components of the renovation, including the creation of more ticket-counter space and relocation of the security area.

The speed with which the airport’s passenger numbers continue to climb will determine the construction time line for a new, larger terminal on the airport’s eastern side.

Some analysts believe Gateway has a long way to go before its success and status mirror that of more established reliever airports, despite the growing regional population and its attractive runway lengths and lower operational costs.

Are you excited for these cheap flights to Denver?  Let us know in the comments below.