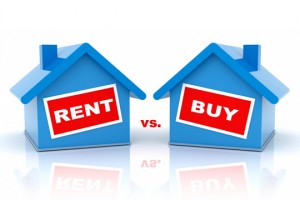 Conventional wisdom is that young couples and people just starting out should rent before they buy. However, that age old practice is making less and less sense now in the Phoenix area. Trulia, an online resource for homebuyers, sellers and renters, released a report Monday indicating that it is cheaper to buy a home than to rent one in Phoenix and Mesa, as well as in 34 other major cities.

In an indicator of the housing market across the nation, Trulia found that it is more affordable to buy than to rent a two-bedroom home in 72 percent of America’s 50 largest cities. The report lists the top 10 cities to buy instead of rent, with Mesa ranking number four and Phoenix following at number five.

Since the beginning of the ‘Great Recession,’ many former homeowners have flooded the rental market. Following the principles of supply and demand, renting has become relatively more expensive than buying in most markets.

This is the reason for the flood of investors coming from out of state and out of country. Cash buyers are gobbling up foreclosures and cheap housing in the phoenix metro area because they can be rented out for nearly twice as much a typical mortgage would be on the property.

The hardest part for many looking to purchase a home right now is actually winning the bidding process. The inventory is so low right now that many properties are receiving upwards of 20 offers per property. “It is very rare to see a bank owned property sold for less than the bank is asking for the home”, said Troy Reeves, “With less than 20,000 homes on the market investors are jumping at every opportunity”

The only large cities in which rent is cheaper than buying are Seattle, New York, Kansas City and San Francisco.