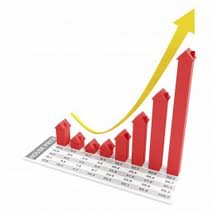 Metro Phoenix’s housing market took a turn for the better last month, and if current trends continue, home prices could start to climb again before the end of the year.

Market experts say the number of successful home sales is at near-record levels, the number of homes for sale is dropping, future foreclosures are in decline and home prices, although low, are holding steady.  Troy Reeves predicted the market turnaround earlier this year.

The shift in the region’s housing market started in March. An upward turn, if one materializes, would be much more significant than just another twist in an ever-changing market. It would mark the end of the worst housing bust metro Phoenix has ever experienced.

Overbuilding during the first half of the past decade preceded a collapse of the American mortgage industry and, later, the global economy. Phoenix-area houses lost more than half their value since the peak in 2006. During the bust, foreclosures soared and home sales dropped. Arizona’s economy, long dependent on housing, fell apart.

The years since have seen new construction grind nearly to a standstill. Job losses and foreclosures meant there were many more homes for sale than there were buyers. Prices finally rose slightly in 2010, then fell again as still more foreclosures flooded the market.

That “double dip” has made many market watchers wary of being too optimistic about the latest positive news.

Phoenix real-estate analyst Tom Ruff of the Information Market, a real-estate data firm, said almost all the key market indicators that turned negative during the summer of 2010 and led to the second dip in home prices late last year have now turned positive.

“I am not being overly optimistic when I say home prices could climb during the next six to nine months,” he said. “Those same market indicators that went negative last year are now turning positive.”

Last month, existing-home sales in metro Phoenix climbed to their highest level since October 2005, which was in the midst of the boom. There were 10,031 resales in March. The number includes a record 1,311 homes that were sold at auction as part of a foreclosure.

Analysts believed the credit spurred most of the likely buyers in the market to make a move, meaning few other prospective buyers would exist after the credit expired. Indeed, by the expiration that summer, sales fell off substantially and remained low, averaging about 7,000 a month until March.

New homes accounted for as much as one-third of all metro Phoenix home sales before and during the boom but have since plummeted to only about 7 percent of the market.

Jay Butler, director of realty studies at Arizona State University, said March is traditionally a strong home-sales month in metro Phoenix. During the spring, homebuyers try to purchase so they can finalize their deals and move before the next school year.

Butler’s monthly housing report, released Tuesday, was more upbeat about the market’s recovery than it has been in past months.

However, he still is concerned that a “glut” of foreclosure homes on the market could continue to delay a recovery.

And although sales are up, most of those sales – about 65 percent in March – are what the industry calls “distressed” properties: homes sold at foreclosure auctions, taken back by lenders through foreclosure and resold, or short sales.

Although foreclosures continue to drive the market, signs indicate those could soon start to decline.

The historic recession left many in metro Phoenix without jobs, and plummeting home values meant many homeowners who couldn’t afford their mortgages also couldn’t sell their homes for what they owed. The result was a huge wave of foreclosures: Buyers defaulted on their mortgages, and banks either sold the homes at auction or took them back and waited to resell them on the market.

The result was a glut of inexpensive foreclosure homes for sale. Experts have long said that home prices wouldn’t recover until foreclosures subsided.

Last month, the number of homes foreclosed on actually climbed – but the shift was expected. Lenders last fall put a moratorium on foreclosures amid questions about their handling of the practice. Those foreclosures are now being finalized and artificially inflating the monthly numbers. In March, there were 5,000 foreclosures or trustee sales in the Phoenix area, up by about 500 from February.

The more important indicators are so-called pre-foreclosures, or notices-of-trustee sales. The legal filing notes that a lender plans to seize a home from a delinquent buyer and sell it at auction; it typically precedes a foreclosure by three to nine months.

Pre-foreclosures have been hovering around 5,000 a month this year, after averaging 7,000 a month in 2010. This signals fewer homeowners are falling behind on payments or abandoning their homes, meaning fewer future foreclosures.

For the past year, investors have bought the majority of the region’s foreclosure homes and turned them into rentals that are filling up quickly with tenants who lost their homes or can’t afford to buy.

Homes being sold after foreclosure or homes offered for short sale – in which banks let homeowners sell for less than they owe – now typically make up about half of all homes listed for sale.

Although that remains the case, the total number of homes on the market was about 36,000 on Tuesday, a more than 15 percent drop from last year’s supply.

“Both investors and owner-occupied buyers are starting to burn through the inventory of homes for sale,” said Beth Jo Zeitzer, president of Phoenix-based ROI Properties and an expert on distressed property sales.

She said buyers who can pay cash, usually investors, continue to dominate the market.

Julie Bieganski, a Phoenix real-estate agent and investor, said it’s becoming more difficult to find inexpensive homes, including foreclosures, in popular neighborhoods because there are so many more buyers vying for them.

The median price of resales in metro Phoenix has held steady at $115,000 since December.

Although it’s good news prices haven’t dropped this year, the median remains at the low it fell to last fall after the second dip.

Not every indicator points to an uptick.

The Arizona Regional Multiple Listing Service, an index of homes for sale run by local Realtors, maintains data on homes under contract for upcoming sales. This data, the Pending Price Index, has called for another big drop in Valley home prices this year.

However, in January, the index predicted the area’s median would fall to $100,000 by March. Instead, prices remained steady.

The group’s index is now forecasting the median price for metro Phoenix home sales will be $113,000 in April.

Based on the pending sales index from the “Cromford Report,” a daily analysis of listings data and public records, home sales and prices this month are supposed to stay at March’s levels or climb higher. Pre-foreclosure filings are down so far this month.

“The housing market is showing encouraging signs of a strong recovery in demand and a correction of an oversupply problem we have had since 2006,” said Phoenix housing analyst Mike Orr, publisher of the report.

He said metro Phoenix home prices could start to gradually climb later this year or there could be a “sharp movement” up in prices.

“My guess would be (home prices will increase) sometime before the end of the year,” he said, “and possibly quite sooner.”