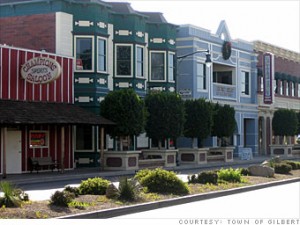 In the new issue of Money Magazine, an article ranks the best places to live in 2010.  Two locals in Arizona made the top 100.  Scottsdale and Gilbert were both represented in the July Issue.

Scottsdale was ranked 71st while Gilbert filled in the 36 spot.  The cities were ranked on issues such as, safe streets, good schools, ample job opportunities and affordable real estate.

Gilbert was described as such:

Whether grabbing something to eat at the famed Joe’s Real BBQ restaurant, shopping in the Downtown Heritage District, or hitting the greens at the Trilogy Golf Club, residents of Gilbert are never at a loss for things to do.

This safe city a half-hour outside Phoenix celebrates the anniversary of the paving of Gilbert Road each year during Gilbert Days, a three-day event that includes a rodeo, a parade and a carnival.

The housing market was hit here hard, though, and it has yet to recover.