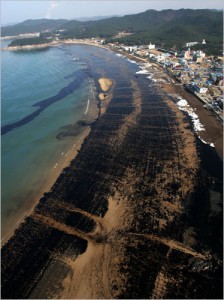 Falling real-estate values are one consequence of the worst environmental disaster in U.S. history as oil keeps gushing from a BP well once pumped by the Deepwater Horizon rig. An April 20 explosion there killed 11 workers. Oil washing ashore will further harm property values in an area where Moody’s Economy.com estimates prices fell as much as 34 percent from the peak of the U.S. residential real estate market in 2006.
The median U.S. home price was $173,100 in April, down 25 percent from July 2006, according to the Chicago-based National Association of Realtors. Florida real estate is among the hardest hit markets, with one in every 184 households in the foreclosure pipeline, according to RealtyTrac Inc., an Irvine, California-based data company. Only Nevada and Arizona have higher rates, RealtyTrac said yesterday.
25,000 Barrels
BP’s well had been spewing 25,000 to 35,000 barrels of oil a day, according to estimates by U.S. government scientists released yesterday.
The spill may cost the London-based company $37 billion in cleanup and reimbursements for economic damage to the tourism and fishing industries, according to a June 2 report by Credit Suisse Group AG. The report didn’t include the effect on property values.
Costar, based in Bethesda, Maryland, made its forecast for property prices assuming a 10 percent loss based on previous disasters, such as oil spills, hurricanes and the 1979 Three Mile Island nuclear accident in Pennsylvania, Miller said. His estimate relied on recent sales data of property within 200 feet of the Gulf waterfront and spanning 600 miles from Venice, Louisiana, to Clearwater, Florida.
The analysis valued the property at about $3 million an acre, or $43 billion for the entire coastline measured, he said.
Louisiana Forecast
Costar’s loss estimate aligns with a projection for southern Louisiana and Mississippi property values by Arthur Sterbcow, an independent real estate broker and analyst in New Orleans. Sterbcow forecasts values in that area will fall 5 percent to 15 percent in the next 12 months.
“It could be 20 percent in some areas,” Sterbcow said in a telephone interview. “Every day I’ve had to revise my numbers negatively.”
One of the first real estate casualties will probably be mortgage payments by hotels and restaurants if tourists avoid the area during the peak summer season, said Don Epley, director of the center for Real Estate at the University of South Alabama in Mobile, Alabama.
Occupancy in Florida Gulf Coast motels increased 7.2 percent from May 1 through May 29 compared with a year earlier, according to Jan Freitag, vice president of global development at STR Global, a travel research company based in Nashville, Tennessee.
Beach Vacations
The increase may be attributed to visitors “frontloading their vacations to be at the beach while there still is a beach,” Freitag said June 9.
“The defaults will start happening in early fall,” Epley said. “You can directly attribute those to the oil spill.”
The disaster has led to the closing of about 78,300 square miles (203,000 square kilometers), or almost a third, of federal waters in the Gulf of Mexico to fishing, the National Oceanic and Atmospheric Administration reported June 7. A six-month moratorium on offshore drilling will shut 33 deepwater rigs in the Gulf, costing as many as 20,000 jobs by the end of next year, Louisiana Governor Bobby Jindal wrote in a June 2 letter to President Barack Obama.
“It would be the knockout punch the Great Recession didn’t deliver,” Jack McCabe, a real estate analyst in Delray Beach, Florida, said of the oil spill. “If oil hits the beaches, there’s no way to quantify the devastation.”
St. Joe Co., which owns 578,000 acres (234,000 hectares) in northwest Florida, including about 130 miles on the Gulf Coast, has seen its stock fall 34 percent since April 29, when Jindal declared a state of emergency. The company has built protective booms and taken aerial photos and soil samples as evidence in case it files damage claims with BP, Jacksonville, Florida-based St. Joe said in a June 8 statement.