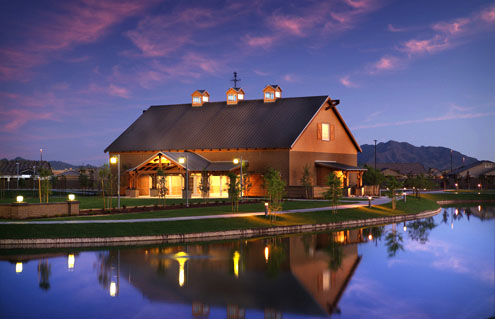 Even with the current economic downturn and challenging housing market, there is still one city in Arizona that has been able to weather the storm and continue to grow… Gilbert, AZ.  Gilbert homes have been able to withstand the decline that other surrounding cities have been impacted by, and because of that Gilbert continues to attract residents from all over the United States. With gorgeous communities such as Power Ranch, Trilogy, The Groves and many more, it is no wonder why Gilbert continues to prosper.

In a study that analyzes trends for total crime, Gilbert was named the safest municipality in Arizona.  Gilbert has a population of 220,000 and was ranked 24th in the entire united states.

The good news continues to pile up this year for Gilbert. In the annual heads of households survey 97 percent expressed satisfaction with the town of Gilbert.  Also, 2009 showed a great deal of community involvement.  The Gilbert days parade was revived by its citizens after being canceled due to a lack of funding, also there was an uptick in participation at community events such as block parties and watch programs

Gilbert Homes have and will continue to see an increase in sales over the next several years. Already, since August of 2008 to August of 2009, Gilbert home sales have seen an increase of nearly 20% which is far better than most other cities located in Arizona.

Please take some time and go through out site. The Reeves Team has been buying and selling Gilbert Homes for over 15 years. Whether you are looking to buy a home or sell a home in Gilbert or any other surrounding cities, the Reeves Team is confident in their ability to make your next home buying experience pleasurable and memorable.

Contact us today to learn more about Gilbert and why we think it is one of the best cities to live in!