LDS (Mormon) Temple Gets the Go Ahead In Gilbert 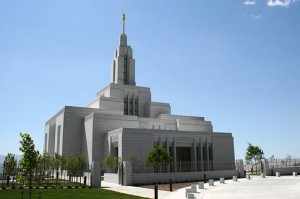 Plans for an LDS Temple to be built in Gilbert near Pecos and Greenfield road is now one step closer to a reality.    There is currently only one Temple in the Phoenix Metro Area.  However the population of LDS members is growing quickly giving rise to the need for more Temples.  There are currently an estimated 100,000 church members in the S.E. Valley and 361,817 members in Arizona.

The construction of an LDS Temple, considered the most sacred place on earth to the LDS community, has a history of dramatically increasing the value of homes in the surrounding area.  The newest Temple in the U.S. was opened in Idaho last August.  After the announcement of the temple property values immediately surrounding the temple doubled overnight.  Developers call increase in property value the “Temple Effect”.   Mormon Temples are relatively rare, and because they are considered sacred, many LDS members like to live in the shadows of these buildings.

If the Temple is built with the 180 foot steeple intact it will become Gilbert’s tallest standing building.   The building would exceed current city limits on the heights of buildings, and will have to go before the Gilbert Town council before it can begin construction.  It is unlikely however that the building will encounter much resistance when considering the positive effects on the community and town.   A key committee gave the project a green light earlier this week.  Once the town hall votes to approve the construction the church plans to begin construction within a year.